In 2014 a startup called Hello launched their first product on kickstarter the "Sense". This little orb of intricate injection moulded plastic was easily the most fully featured sleep tracking device available to consumers. The business model was solely based around sales with no ongoing service fees. This made the business very unsustainable. After attracting quite a lot of success and breaking into mainstream retail sales Hello folded in 2017.
Unfortunately, this left the hardware unsupported with no servers to process it's data. The Hello company did initially offer some support for the idea of open sourcing support for their devices but this never got off the ground. Fast forward to 2020 and it has become obvious no one is going to get the original hardware working again. It simply wouldn't make sense in the days of $4 WiFi enabled MCUs to put the effort into reverse engineering the software stack on the Sense. What does make sense is scavenging some of the amazing industrial design and sensors and building a new data logging solution.
The original Sense offers 6 environmental sensors: illumination, humidity, temperature (HTU21D-F), sound, dust (Sharp GP2Y10), and motion, via a bluetooth dongle. I'm only interested in air quality so my work only involves those sensors.

Before tearing my device to pieces, I had a look around the internet and stumbled onto Lyndsay Williams' Blog. Lyndsay did a great teardown and inspection of the Sense back in 2015 and his images were a great help to me.
To summarize, the Sense is built with 4 PCBs. From bottom up: power conditioning, LEDs, processor, and finally sensor board.
Between the LED board and the processor sits the Sharp GP2Y10 dust sensor.
To avoid self heating, the HTU21D-F is mounted at the bottom of the device near the input air vents. The intent here seems that any heat generated in the device will create an updraft. Any resulting airflow would contribute to keeping the temperature and humidity values reasonably true. Reviewing the layout of the sensors shows that for this project only the power conditioning board is needed. All the others can be removed. This leaves plenty of space to fit a NodeMCU board inside the Sense.
In order to power the replacement MCU and talk to the HTU21D-F, there needs to be several connections to the power conditioning board. Originally, these were made with a flex PCB ribbon cable. Not having access to an appropriate header, the obvious solution was to take inspiration from the insanity that is the Wii Modding community and break out the magnet wire.
Using a multimeter in continuity mode, I probed around the power board and found pads which carried the I2C signals from the HTU21D-F and the USB power signals. The same process could be carried out to interface with other sensors in the device, but as previously mentioned I was only interested in air quality. After soldering magnet wire to each of the pads, I applied a couple of dabs of enamel nail polish to relieve the wires and avoid having to do any later rework. 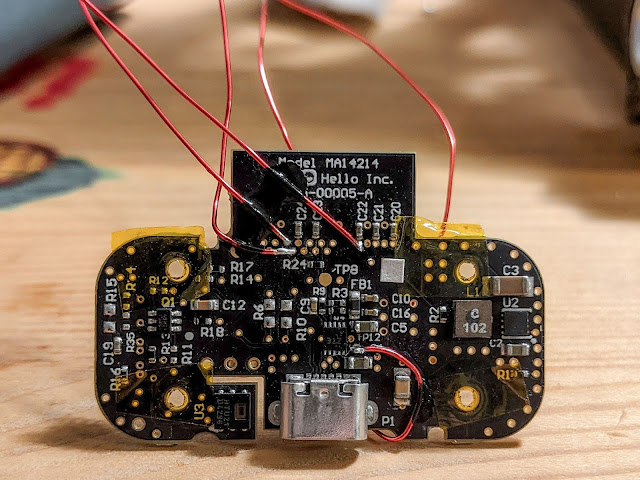 Wiring to the Sharp GP2Y10 was somewhat simpler. Again the connection is made with a ribbon cable. However, in the case of the Sharp sensor this is a regular wire cable. The MCU end of this cable can be snipped off and soldered to. The Sharp GP2Y10 is a really frustrating device. It's apparently calibrated at factory but relies on two external components (a resistor and capacitor) to control the sensing and readout. This means that the sensor can never be more calibrated than the tolerance of the external components. It would have been extremely easy for Sharp to have integrated these and calibrated the system as a whole. With the magnet wire mess already well underway from interfacing the temperature sensor, I decided to simply float the support components for the Sharp sensor. 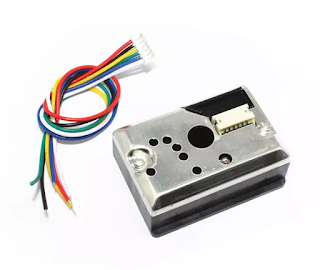 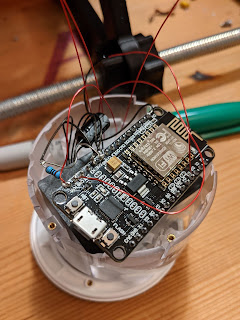 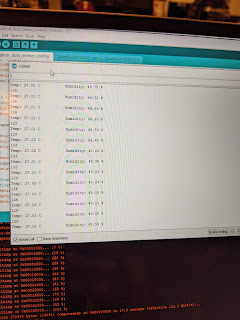 With all the sensors wired up, I powered up the board by the USB port on the NodeMCU and tested out my interface code. It turned out that several of the digital pins broken out the NodeMCU have odd reservations and the trigger pin for the Sharp sensor had to be moved.
After this was complete the sensors worked as expected. The only issue was the really intense LED on the NodeMCU.
The Sense was designed to include a ring of LEDs and as such, the whole thing lights up blue. That wasn't desirable so the LED was quickly desoldered. After carefully reassembling the device, the hardware work was complete. (I did not bring the USB data lines from the power board up to the NodeMCU so the device must be opened to update the firmware via USB). 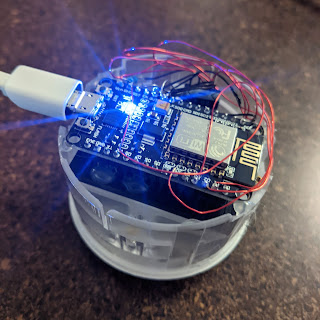 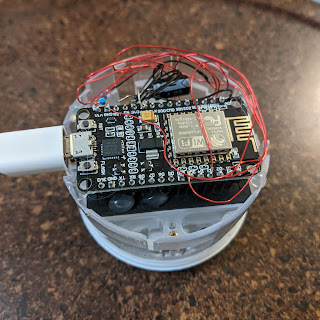 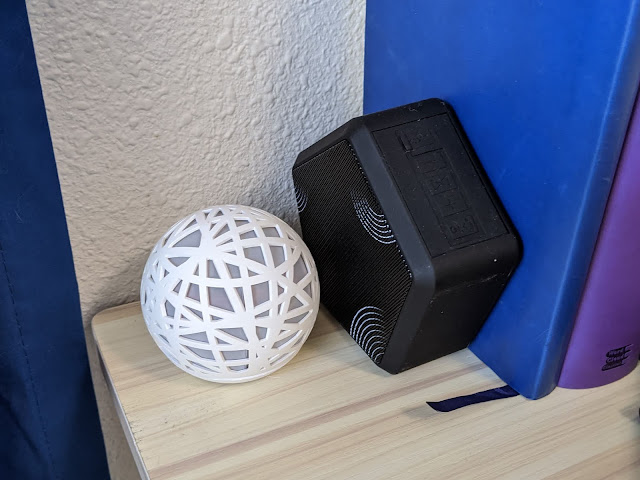 For collecting and monitoring the data I looked into a lot of solutions. For this project I wanted long term data storage, low cost, and MQTT as the data transfer mechanism. Adafruit and Particle offer hosted services which meet two of these conditions, but fail to provide the full package. Turning to DIY solutions ELK(Elasticsearch, Logstash, and Kibana) was my first thought. However, while searching around on GitHub I found similar datalogging project by Nilhcem. He uses MQTT, InfluxDB, and Grafana. This is a much better stack and thanks to Nilhcem, you can stand up his logging solution from a Docker Compose file in about 5 minutes. A couple of simple Grafana graph configurations later, and you should have a dashboard like this. 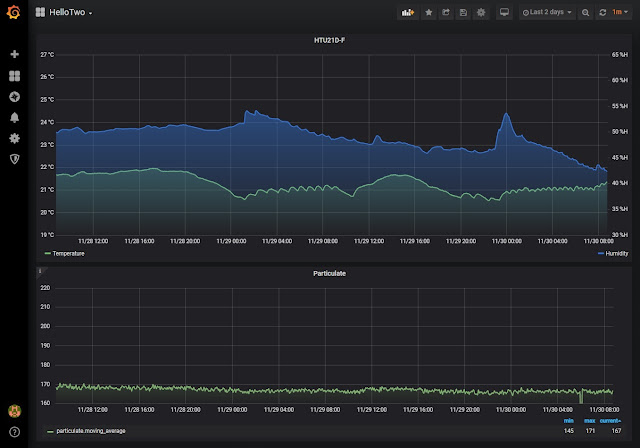 If you have a Hello Sense sitting around and want to replicate what I built, you can pull the Arduino code from my GitHub here: https://github.com/Bostwickenator/HelloTwo.

Posted by Alexander Gee at 6:52 PM